The Best Dog Breeds For Families With Other Pets

If you’re a real animal lover, you might be one of those lucky people with a mini menagerie in their own home.

While operating a tiny zoo is pretty much the stuff of dreams, it can make things a little more difficult when you’re thinking of adding a pup into the mix—separating an eternally squabbling set of animals is no one’s idea of fun! That’s why Puppy Hero is here to save the day with this list of the best dog breeds for families with other pets.

Dogs That Are Good With Other Dogs

Whether it’s seeing a couple of dogs lunging at one another in a park, or witnessing a terrified pup make a great escape from another dog by flinging itself behind the sofa, we’re all familiar with how things can go wrong when dogs don’t get along. From having to console a freaked-out pup, to separating a full-on dog fight, things can get pretty nasty.

If you already have a dog as part of your family, you’ll want to ensure that your furry friends have the best chance possible of becoming best buddies with one another. That journey of friendship starts with picking the right dog breed. Here are just some of the breeds that get along with other dogs.

English Foxhounds are the social butterflies of the canine world. Think of the most extroverted, friendly person you know—they have some real English Foxhound vibes!

This breed thrives on being part of a pack. So much so, that it can actually be pretty detrimental to their wellbeing to not have another dog around to snuggle and play with.

This super outgoing breed is relatively bright, making them a little easier to train than some other breeds that may be a little lacking in the brain department.

Given their energetic nature and love of play, they will need somewhere outdoors to blow off steam each day. You’ll also need to bear in mind that this breed does have a propensity to bark. Though this can make them great watchdogs, they may not be the best choice for people who need peace and quiet, and they may not be the best dogs for an apartment.

If a gentle, affectionate, medium-sized dog that loves company is your idea of a perfect breed, you’ll want to get a load of viz.

Vizslas love spending time with their owners as well as other dogs but don’t cope very well on their own. They have a lot of energy, which means they’ll need a good amount of exercise, and will really enjoy a good tug of war or ball game with their human and doggy friends. They’re also a large hypoallergenic breed, making them well suited to people who need a dog that won’t trigger their allergies.

Calling all Lassie fans! If you’re looking for a dog with true star quality, look no further than the gorgeous, graceful Collie breed. Though your Collie may not save children from drowning in fast-flowing water before making a miraculous return from the dead, their reputation for being super loving and loyal is pretty spot-on.

As well as being very trainable, energetic, and a pretty good watch-dog breed, they’re also really friendly, and enjoy the company of humans and dogs alike, making them amongst the best dog breeds for families with other pets. They will need a fair amount of physical and mental stimulation, however, as these clever dogs are bred for herding, and like to keep busy.

Thought to have been initially brought over to the US on the Mayflower, Cocker Spaniels have been welcomed into American homes ever since. If you choose a Cocker Spaniel, you’ll find yourself sharing a home with one of the most chill dudes in the doggy world. You might even find yourself wanting to invest in a pup-sized baseball cap and a pair of designer shades to achieve ultimate cool vibes.

With their floppy ears, doe eyes and silky coats, we wouldn’t blame you for falling in love at first sight with this adorable breed. However, there’s a lot more to the breed than just their looks.

They’re also affectionate, adaptable, and playful, and love mucking around with their humans as well as other dogs—making them one of the best dog breeds for families with other pets. Plus, their sweet nature makes them a lovely breed for emotional support. They can be a little protective of their pack though—so be sure to be patient and calm when introducing them to strangers.

Best Dog Breeds To Have With Cats 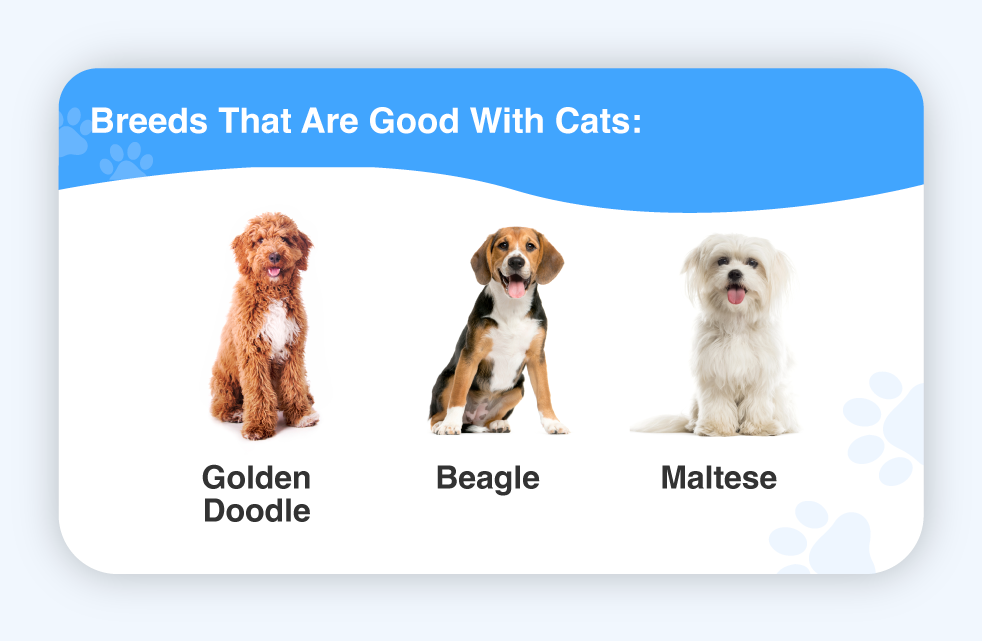 Cats and dogs are known for being mortal enemies, with relationships pretty similar to that of Batman and the Joker, or Jim and Dwight from The Office. While you may not find a cat encasing a dog’s stapler in jello—you wouldn’t be alone in thinking they would if they had access to office supplies and opposable thumbs. Darn those furry paws.

Here at Puppy Hero, however, we have a much more optimistic view of the relationship between cats and dogs. In fact, we’d argue that a cat and a dog of the right breed can even make a lovely duo, proving to be one another’s BFF. That said, here are some of the best dog breeds to have with cats.

Combining two of the most iconic dogs to ever grace this mortal realm, the Golden Doodle is a super cute mix of Poodle and Golden Retriever.

This breed is blessed with the friendly, sweet and playful nature of a Golden Retriever, as well as the intelligence and trainability of a Poodle. They also have a low prey drive and a calm demeanor, meaning that, unless you have a particularly standoffish cat, your pooch and your kitty should soon become fast friends.

The Beagle is a frequenter of our lists of fabulous breeds—-and for good reason. As well as being a firm favorite for families, they’re also one of the best dog breeds to have with cats.

Known for being pretty laid-back, this breed isn’t super discerning about who it allows into its pack, and this includes those of the feline species. Thanks to their calm nature, they’ll be more than happy to share space with a cat, and certainly won’t be found chasing their four-legged housemate up and down the hallway causing a ruckus.

They’re also very friendly and love company, so they’ll certainly appreciate having a little buddy around to keep them company when you leave for work or a trip to the grocery store.

They will require a moderate amount of exercise and time outdoors, as they can get a little bored if they don’t get a chance to burn off energy.

If you’re looking for a dog that can join in with your hair care routine, look no further than the beautiful Maltese breed.

Though that glorious coat will need some TLC, this breed is far from the diva their looks may suggest. In fact, these little guys are hardy, affectionate and adaptable.

What makes them one of the best breeds to have with cats is their low prey drive, small stature and relaxed nature.

Dogs That Are Good With Other Pets 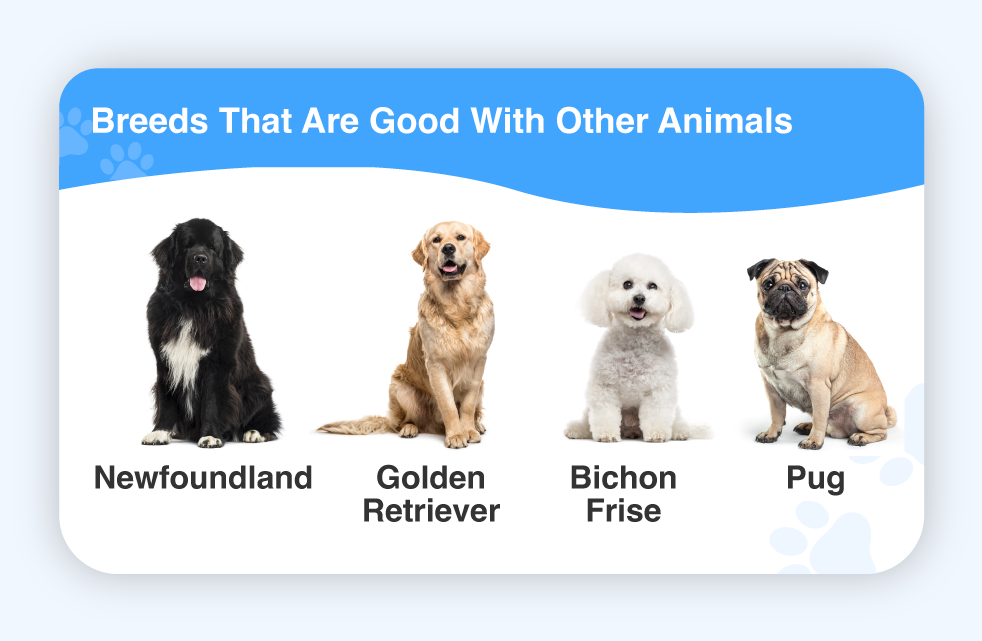 One of the must-haves for a puppy that’s going to share a home with other animals is a low prey drive. Though it’s fun to watch Tom and Jerry’s rivalry play out on TV, it’s safe to say you probably don’t want that kind of thing going on in your home. Though you definitely can have a dog with other animals, you will have to be careful about the breed you go for. Here’s what we’d recommend.

Don’t be put off by the size of the Newfoundland breed—these gentle giants are the teddy bears of the canine world.

Newfoundlands have a reputation for being some of the friendliest pups out there, and thankfully, this friendliness extends to smaller animals like rabbits, ferrets or guinea pigs. Their docile and patient nature means they shouldn’t pose any threat to their smaller housemates, making them one of the best dog breeds for multi-pet households.

They do, however, have a propensity to drool a fair amount, so be sure to stock up on towels!

Though Golden Retrievers are so named because of their golden color, it’s also pretty reflective of their hearts of gold.

Renowned for being super sweet and highly affectionate, a Golden Retriever would be totally comfortable with some smaller fur buddies to hang around with. Just ensure you socialize your Golden from an early age, as you’ll want to ensure they reach their full potential.

Though their curly, fuzzy coat is technically made of fur, we like to think of it as friend material.

Bichon Frises are one of the friendliest dog breeds out there, making them one of the best dog breeds for families with other pets. Though their devotion to their favorite human means they can get a little downhearted if they don’t get their fair share of love and attention, their low prey drive and calm temperament mean they’re a good dog to have with other animals.

They will need frequent brushing, however, so make sure you’re ready to take on that glorious floof!

Pugs crop up everywhere when researching the best dog breeds for families with other pets. With a squished-up face that’s so adorable, you’ll be tempted to squish it even more, Pugs have a personality to match.

Mischievous, charming, and loving, these lil’ couch potatoes will be more than happy to spend time chilling on the sofa with you while you get on with your work, or settle down to watch a movie.

Their placid nature means they have a low prey drive, and won’t be interested in antagonizing or giving chase to any other furry family members. This is a breed of dog that gets along with rabbits, guineas and other little animals.

Advice on Having Dogs With Other Animals

No matter what breed you go for, you’ll still need to put in the work when it comes to the smooth running of a multi-pet, or multi-dog house. We’d advise:

This will help them get comfortable with having other humans and animals around.

It’s normal for your dog and other pets to need some time before getting totally comfortable with one another. The journey towards being best buddies has to start somewhere!

This is especially crucial during those early days when your pets are newly introduced and may still be a little nervous around one another.

Though you’ll want to shower your new arrival with an abundance of love when you buy a puppy, make sure you don’t forget about your other pets. The last thing you want on your hands is a rivalry between two pups because one is getting more attention than the other. Making sure there’s enough attention to go around is a sure-fire way to keep all your furry friends happy and content.

Whichever breed you have set your heart on, check out Puppy Hero’s breed finder to learn more about all the fabulous breeds we can help you bring home, and make sure you find the best dog breed if you’re a family with other pets.

Browse PuppyHero by state or by breed.